I’ve been trying to make it back to Madrid for two years, and finally, here I am, and so excited to be here!

I managed to dry my eyes and jump into action in just enough time to pack and prepare for departure. Major gratitude goes out to my friend KB, who brought me to the Columbia Sportswear employee store the day before I left and let me use her discount. Now I am decked out like a Columbia fan girl, but wherever my backpacking adventures take me, I am roughly 1,000% more likely to stay warm and dry!

Flying out on Tuesday morning, everything still felt surreal until about Toronto, where I ate the world’s most expensive grilled cheese sandwich while listening to the airport announcements in French, and started to realize this adventure was really happening.

Back in the Seattle airport I’d jockeyed for one of the last window seats available on the flight to Madrid, but after boarding the plane and sitting down, my neighbor turned to me with sad puppy love eyes and asked me if I would be willing to change seats with her husband so they could sit next to eat other.

Did I say yes because I am a hopeless romantic, or because it would have been terribly awkward to sit next to the woman for seven hours after saying no to her request? I’m not sure, but in exchange for my miniature heroics I had the chance to experience a fun bit of serendipity.

Sitting next to me in my new location was a recent college grad who was on her way to teach English as a foreign language for a year before starting her Masters. I happened to look at her messenger bag and noticed the iconic yellow O that represents University of Oregon, and as it turns out, we were both traveling from Oregon to Madrid, although since her family lives in the eastern end of the state, she had connected to the Toronto flight from Boise. What a coincidence! She was adorable, and chatting with her during the flight was more than enough to make up for the loss of my window seat.

Upon arriving, Gonzalo (my couchsurfing host) generously spent his lunch break scooping me up from the airport and bringing me back to his apartment. This was the first of several incredibly kind and thoughtful things he has done, including taking me out to dinner with his friends, and setting out everything I needed for breakfast before he left for work. This is what I woke up to this morning: 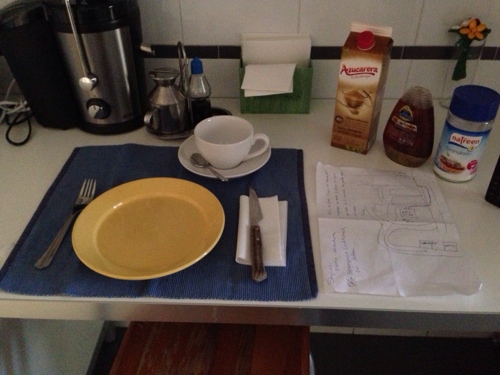 Notice the little paper on the right side? He drew me a map with directions to the Metro and the nearest grocery store. What you don’t see is that he left two slices of bread in the toaster, and coffee in the espresso machine, so all I had to do was push two little buttons to make my breakfast. What a nice guy !!

After sleeping way too late, I went out this afternoon and reacquainted myself with the downtown area of the city, wandering through Puerta del Sol (this time not filled with acampados as it was when I was here during the 2011 protests), down Gran Via to Plaza de Espana and into the palace gardens, then heading back up again and getting helplessly lost in a maze of narrow side streets. Outdoor cafes filled with friends taking two hour lunch breaks, vendors and grocers with an entire wall open to the street, teenagers sprawled on monuments and lying in the grass like puppies, old ladies walking tiny dogs, everyone eating ice cream … all the charmingly Spanish scenes swirling around me as I made my way through the city. Even at the end of September the sun is still penetratingly hot, and I am deliciously exhausted after my first day of adventure.