Looking back at this weekend, it’s hard to imagine how we crammed so many amazing things into three short days.

Our original plan had been to rent a car and drive to Lourdes, France for one day and night, then to spend another day and night in the Spanish Pyrenees. Unfortunately, for reasons which are still mysterious to me, our rental car could only be driven around Spain and Portugal but not brought to France, requiring us to change plans at the last minute.

Instead we drove straight to the Spanish Pyrenees, with a stop in Zaragoza along the way. Santi took me to see the Cathedral of Pilar, and we wandered around a bit looking at shops and walking along the banks of the river.

After a little dinner in the plaza in front of the cathedral, we left the city just around sunset. In one way this was amazing timing, because our parting view of city was the skyline silhouetted against a backdrop of glowing pink, the domes of Pilar and a flock of birds outlined in soft black, and a giant carousel on the fairgrounds lit with a thousand tiny bulbs, slowly turning in the twilight. Would that I had been quick enough with my camera to capture this magical sight as we drove away!

As we soon discovered, in another way our departure at sunset was terrible timing. Having been fraught with completely non-functional data on my iPhone since arriving in Spain, I realized my usual strategy of relying on GPS to navigate in unfamiliar places would do nothing for us, especially during the mountain portion of our drive. I’d spent a good two hours the day before, typing out turn-by-turn directions into Evernote to get us to each stop on our planned journey. But instead of heading to Sabiñanigo from the west as originally planned, we were now heading to the town from the east.

Reversing our directions would have been confusing enough, but our travels were further complicated by the fact that Spain is in the process of updating all the highways in rural regions of the country in a completely non-linear process. What this means is that rather than starting on one end of the road and building steadily to the other side, and opening the roads exit by exit as they are completed, the highways are being built and opened in patches, forcing travelers to navigate back and forth between the new highways and the considerably older, narrower, bumpier roads. And for the most part, Google Maps has not accounted for the patches of new roads whatsoever in their directions.

Of course, given the option, any driver would prefer to follow the smooth wide highways for as long as they can, but being a copilot who is attempting to help navigate these interchanges, in a foreign country AND in the dark, is stressful to say the least. Add to it the fact that the further we drove into the Pyrenees, the more the roads became narrow, steep and curvy (although you might not guess it judging by the way Spanish drivers did NOT slow down). By the time we reached Sabiñanigo around ten at night and realized that my turn-by-turn directions to our vacation rental from the other side of town could not be reversed, Santi was fuming and I burst into tears. Oh the drama!

Somehow we survived the experience, and the next day was just delightful. We started off by winding our way down country roads, following the Camino de Santiago for several miles, before turning up a dirt road and crunching along switchbacks for another twenty minutes or so. Finally we arrived at our destination, San Juan de la Peña, a tiny relic of a monastery clinging to the side of a cliff. Although now abandoned, it was a place of great importance in the Middle Ages, both real and imagined – among other things, it was known as the legendary home of the Holy Grail, supposedly tucked away in the mountains during the Crusades to keep it hidden from the Moors and Saracens. 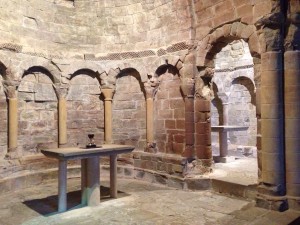 After banging around the monastery for a few hours, we wound our way back down the hillside and followed the River Aragon to the place where the mountains meet the plains, stopping along the way to picnic in a spot with an amazing view: 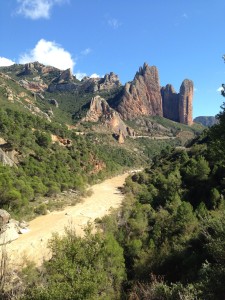 After lunch, we continued onward to Castillo de Loarre, built in the Eleventh Century as a stronghold of the Kings of Aragon as they fought the Moors and attempted to gain control of the Province of Huesca. The castle is dramatically perched on an outcropping which gives magnificent views of the valley below, all the better to scout out invading armies and keep the upper hand in battle, I am sure. 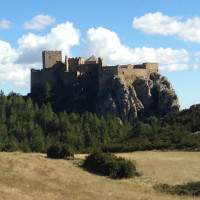 The brilliant thing about traveling in October is that the crowds of tourists have all but gone home, and this was especially true at Loarre. Although we saw a few people leaving as we arrived, and arriving as we left, during the time we explored the castle we had the entire monument to ourselves. That’s right, we were left to explore the ruins of a medieval castle completely alone! For a history geek like myself, it just doesn’t get much more thrilling than that.

After Loarre we continued on to Huesca, a small city rich with history. I found a tiny medieval monastery tucked away in the old city, and trying the doors, discovered that they were open, so I walked right in and started exploring. While I was wandering the courtyard, apparently Santi was being accosted by an old lady who was keeping watch over the church, and threatened to call the police on us for entering. I kept blithely snapping photos for a quick minute after realizing the argument, then with a smile and a “gracias, señora!” I pulled Santi back out the door.

After evading arrest, wandering through a farmer’s market and taking a snack on the town square, we headed back into the mountains, this time well before sunset. The views we’d missed the night before were absolutely breathtaking, and I regret so much that there was simply no safe place to pull to the side of the road and take a few pictures. But, like sunset over Zaragoza, the scenery will live in my memory forever.

This morning, we headed back to Madrid by way of Pamplona, La Rioja and Burgos. In Pamplona we took a walking tour of the path followed by the bulls during the festival of San Fermín, stopping several times along the way to have little nibbles of local cuisine.

We didn’t make a stop in La Rioja, just enjoyed the views of Spanish wine country as we drove through. When we arrived in Burgos, we made a bee line for the famous cathedral, which was breathtaking. I think I may have annoyed Santi with the number of photos I took, because at one point he teased me about trying to take every corner of the cathedral home with me.

Overall, the weekend was a great adventure in which I crossed off many of my “must see” locations, and I’m ending this Sunday night feeling grateful but exhausted!