Monday morning rolled around, and I was still sick as a puppy, camped out at Santi’s brother’s place in Guadalajara. But it was time to roll out of there, because Santi had to get started with his week, and his brother was coming back from the coast that afternoon, so I made my way back to Gonzalo’s place. I felt terribly about asking to stay another night when his original offer was for me to stay until Monday, but I was so sick I could not think of another plan, and Gonzalo not only graciously allowed me to stay but he also brought me medicine. Again I say, what a nice guy!

I spent one more day in a sleep daze, and woke up sometime around midnight, which is when I decided to go on AirBnB and find a room to rent. Not that I ever had a fully baked plan, but my intention was to leave Spain within a few days of arrival, and make a bee line across Southern Europe for the Balkans. But then I got sick, and plus Santi wanted to see me again next weekend, and what’s a girl to do when, against all odds, a cute boy says he wants to see you?

I booked a room off Calle Alcalá, just a few blocks from the apartment where I lived with Maria for a month in July 2011. Totally unbeknownst to me at the time when I saw the listing on AirBnB, it turns out my host is an actress, who has had a leading role on some famous Spanish telenovelas. I am going to call her Marisol because that is nothing like her name, and I want to protect her privacy! I love my cozy and bright little room, and Marisol & I have hit it off quite well. She is great fun, and someone I would want to be friends with even if I was not renting a room from her. I feel so fortunate that I have once again found a kindred spirit and lovely lodgings in Madrid.

Feeling moderately more human on Tuesday, after I checked into my new lodging, I ventured out to try to find someone who could help me unlock my two year old Spanish mobile phone. This turned out to be an epic chore, as first I chose the wrong wireless carrier, and then after I found the correct wireless carrier, I discovered they could not help me because I did not bring my passport. (And here I thought passports were for crossing international borders!)

Once I retrieved my passport, I made my way back to the mobile store, only to discover that the shop was now closed for siesta until 5:00 pm. Not feeling inclined to go home once again, I meandered through the old neighborhood, and ate an ice cream cone. Finally the store opened again, but with all the people in front of me in line, it wasn’t until 6:00 pm that I finally accomplished my mission. One day of my vacation I will never get back!

Yesterday was a far more enjoyable day. I took the metro to Atocha with the intention of visiting some of the major museums, but I realized once I got there that it was far too nice out to spend the day inside a building. Instead I took a walk through the Royal Botanical Gardens, and then meandered across Parque Retiro. When I got to the other side of the park, I realized I was just about a block from Calle Alcalá, so I decided to follow it all the way back to my apartment. Overall, it was a gorgeous autumn day, and I found it was so lovely to be here this time of the year with perfect weather, instead of the kill-me-now July heat I experienced during my last stay in this fair city. 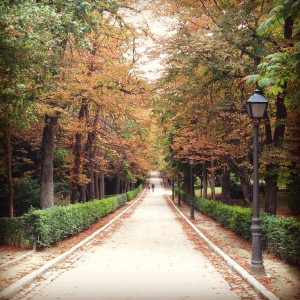 Santi is enrolled in a graduate program at a Catholic seminary, which kept him busy all week with studying and teaching. Since he lives at the seminary and there are no girls allowed, I wasn’t even able to visit him in the evenings. We finally met up this evening, and he chose the Plaza Toros near my apartment as our meeting spot.

Although I am totally opposed to bullfighting, I have to admit that this is a really beautiful and mysterious building, and all the more so when empty but lit up at night. Santi snuck me inside the gates and showed me some “behind the scenes” things, such as the chapel where the bullfighters pray before heading into the ring, and the stable where they keep the bulls and send them through the gates into the stadium. If I could have snuck into the stable and freed the poor animal before the fight, I totally would have, but then what would I do with a giant bull in the middle of the city?

Telenovela actresses, massively inconvenient siestas, bullfighting rings… Overall I think I had a thoroughly, satisfyingly Spanish week. More adventures await tomorrow, as Santi and I venture out for a weekend getaway… Stay tuned!

I've been trying to make it back to Madrid for two years, and finally, here I am, and so excited to be here! Flying out on Tuesday morning, everything…