I made the decision to divert my trip into Italy on less that 24 hour notice, so I really shouldn’t be surprised that my plans went a little haywire.

The night before last, I’d found a room near Lake Como and tried to book it with my credit card. The owner of the account sent me a message and verbally accepted my reservation, but apparently never actually clicked “accept” on his end. I drove blithely down through the mountains yesterday unaware of any potential conflict, while unbeknownst to me, another lodger booked my room for the night.

I think my blissed out Switzerland experience came to an end somewhere in the middle of a ten mile long tunnel through the Alps, which, although rationally believing it to be completely safe, nonetheless made me feel more than a little anxious.

I never fully came down off the anxiety induced, tunnel driving adrenaline rush by the time I crossed the border into the city of Como, an experience I can only describe as being rocketed into chaos. Well paved roads and polite drivers were suddenly transformed into a bumping maze of vehicular aggression.

It took me at least twenty minutes to fight my way to a side street calm enough to stop my car and regroup. That’s when I contacted my AirBnB reservation, only to discover that in actual fact, I had no reservation. At 4:00 pm. On a Sunday. Oh my!

I immediately sent more than a dozen inquiries for last minute lodging to hosts all around the lake, and then set my GPS to point me towards the lakeshore so that I could drive out of the urban chaos and calm down for a few minutes while I waited for an answer.

One answer of “yes” did arrive in fairly short order, from a lodging located somewhere near the top of the lake. I don’t think I fully comprehended exactly how large Lake Como actually is, but the trip from the city of Como to the village of Colico took me nearly two hours of winding along a tiny road at times barely wide enough for two vehicles to pass each other. This was the Via Regina, the old Roman road built thousands of years ago, dotted by picturesque lakeshore towns and occasionally covered with mountain mist. 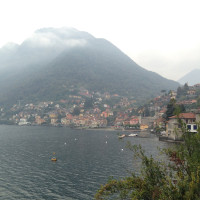 After traveling along the lakeshore, over the river and yes, even through the woods for a few minutes, I eventually arrived at my destination just as twilight was descending and the rains were picking up. My host was a warm and wonderful Italian grandmother, who showed me inside and made sure I had tea and blankets and everything I needed to cozy in for the night.

The house itself was immaculate, made from stone and solid wood, much of it appearing to be hand-crafted. The kitchen downstairs was filled with upside down drying herbs, flowers, and amazing smells. My room was at the top of the house, a private little studio with my own wood stove, huge bathtub and windows that looked out to the mountains. I drew a long hot bath, washed off the afternoon’s chaos and recalibrated for my Italian adventure.

Here is the view I woke up to out my window this morning: 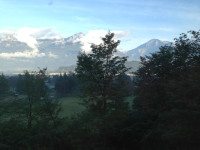 After an oversized Italian breakfast, I ventured out to explore the lake. But first, I stopped in the driveway to take a picture of this lovely home in the daylight: 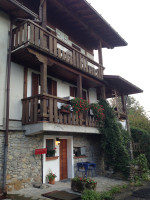 And then, after driving for only a few minutes, I had to stop again to take in the view of the mountains and the lake, which had calmed into a perfect mirror of the sky: 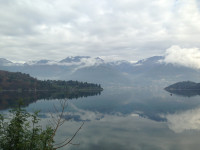 I drove south along the opposite side of the lake, stopping in the town of Varenna to get out of the car and look around. One thing that has impressed me so far about Italian towns is how, although the buildings and infrastructure are certainly older and in a greater state of disrepair than anything else I have seen in Western Europe, every little corner is filled with decorative sculpture and vines and potted plants, as if not one opportunity for creating beauty will be left unseized. 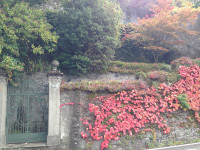 While in Varenna, I spotted a sign that seemed to indicate that a castle could be found just up the hill. Castle?! You know I had to go and check it out!

I stumbled unwittingly onto the “Sentiero del Viandante”, or “The Path of the Wanderer”, an old mule track that also dates back to Roman times. By following the Sentiero, I was able to take in several stunning views of the lake unreachable by car. When I came around a corner, I’m not sure what left me more breathless, the view or the surprise of the ghostly artwork perched on the fence: 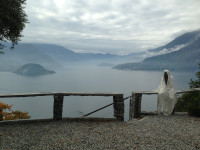 I also found the castle mentioned in the signs I saw in Varenna. It’s a wee, half crumbled outpost from the Middle Ages, its original builder is unknown. Today it is privately owned and sits perched among a gorgeously maintained garden and olive grove. The castle owners also practice the art of falconry, and allow the enormous birds out of their cages to swoop around the castle during the day, which only adds to the mystique. 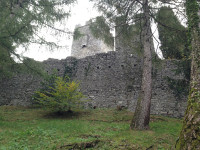 After my misty hike and castle exploration, I went off in search of a warm meal. All of the towns I’d encountered along the lake seemed very quiet and almost “closed down” for the year, but I found one open cafe where I was apparently the only tourist, and ate my first plate of pasta in Italy. Of course I had to follow it with a scoop of gelato!

I’m now back at my forest hideaway, tucked into my studio at the top of the house, cozying up to the fire as the rains start up again.

Everything I’ve seen today has been magical and beautiful, but I’m feeling more alone and lost in a foreign land than I think I’ve ever felt before. This is not necessarily a bad thing, just something new to integrate as I make plans for the next stop on my Italian adventure. 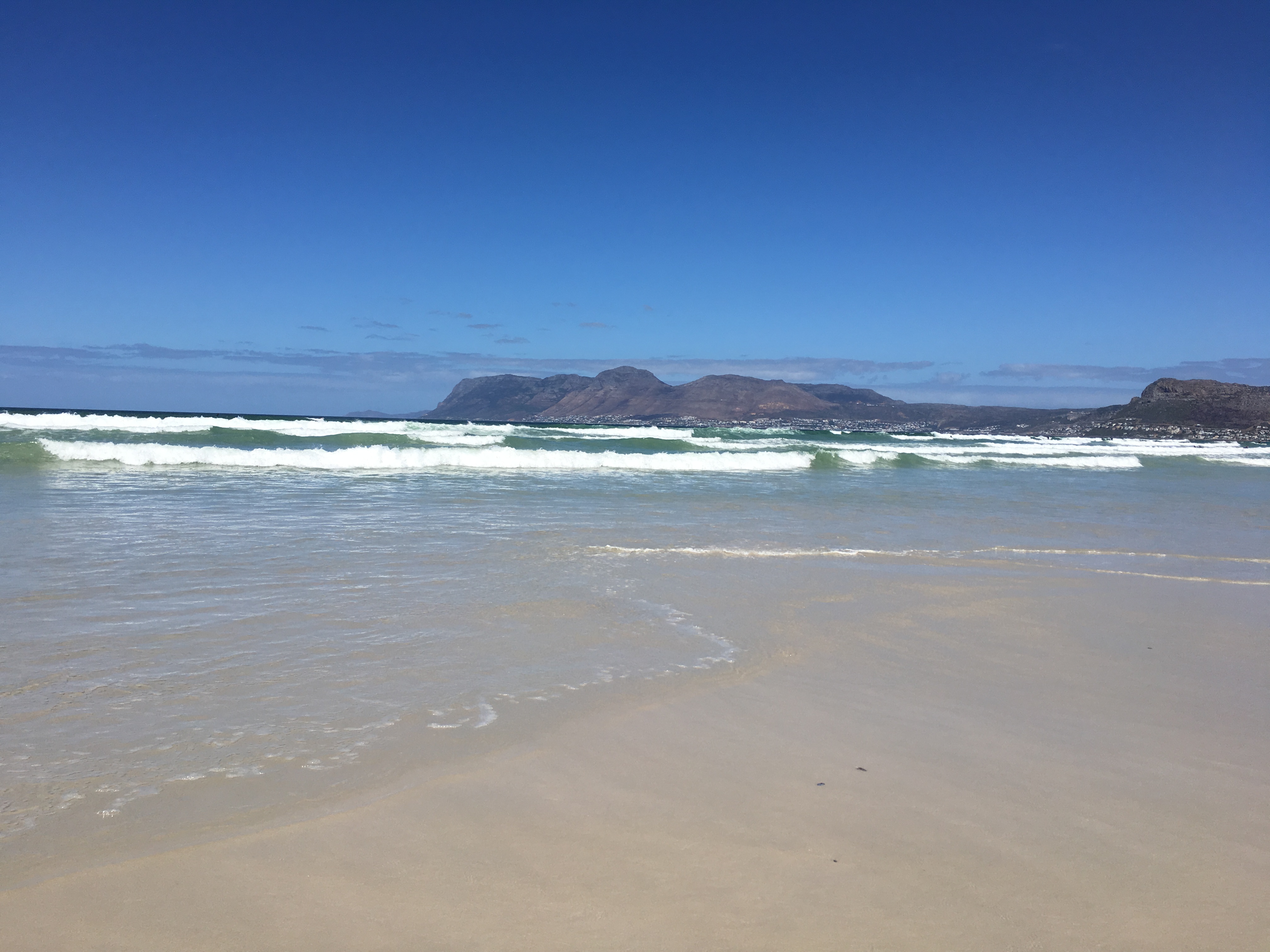